You may have heard of the crisis in Greece. Perhaps you briefly heard the reporter on CNN mention it, as you were switching over to the food network. You may have been wondering what all the commotion is about. In this post I am going to explain the Greek crisis as best as I can, from one dummy to another.

Let’s step back a bit.

Ah Greece. The land of breathtaking islands, togas and olive oil. The great ancient city famous for philosophers, mathematicians and all round debauchery. The Greeks have always lived large and they carried their lavish living into the 21st century.

Compared to other European countries, Greece had it easy. It had a low retirement age of 53, huge public wages, a generous pension system and other social benefits. In addition to their 12 monthly salaries, civil servants famously received 13th and 14th month salaries. Oh let’s not forget their aversion to taxes. Yup. Greeks no likey taxes.

Historians say the government is so generous is because they are somehow trying to makeup for years of war and bloodshed.

Work a few hours a week, chill on a beautiful island, pay no taxes, retire at 12 years old and receive pension.Isn’t that the life? Some people might say the Greeks were simply lazy. I say they were living the dream. I beg your pardon. Even dreams are not that wonderful.

The Greek life seems good, however in the real world, this lifestyle is unsustainable. Governments are funded by taxes, exports and tourism amongst other things. Citizens of a country have to work hard to help fund the government, which in turn is responsible for social amenities like good roads, healthcare, education, infrastructure and the general wellbeing of its citizens. Greece does not have that much to export, so it has rely more on taxes and tourism.

Greece has recorded a budget deficit every year since 1973 and high deficits (>3%) since 1983. In 2004, it spent billions of dollars on now obsolete infrastructure for the olympic games. Since 2001, public sector wages have increased by 88%. How did Greece fund these extravagances? By borrowing and by printing more drachmas, an act which led to a devaluation of the drachma.

In 2000, the countries in the Eurozone decided to abandon their own currencies and adopt one common currency: the Euro. At the 11th hour, Greece was invited to join. The Eurozone was doomed from the start. How can countries such as Germany and Greece be put together? Great news for Greece though. Because it was under the Euro, it had the benefit of borrowing money at low rates. It was creditworthy by association.

Let me bring this closer to home.

It’s like asking people to invest in Nigeria. Investors may be reluctant to do so for various reasons. One being the exchange rate. A foreign investor invests the naira equivalent of $1000 in Nigeria. When it’s time to get back the money, the exchange rate has gone flip flop and the investment is now worth only $800 when converted back to dollars. But if investors could invest in Nigeria using dollars, then they might feel safer. There are other risks-political, default- that may scare a person away from investing in Nigeria. What if it is 100% certain that Nigeria would not default? Investors would have more confidence.

This is similar to what happened to Greece. Investors most likely felt that the eurozone could not default. Investors felt more secure in the Eurozone and they had no problem giving their money to Greece. Rather than using the money constructively, maybe reduce its debt, It was spring break everyday in Greece.

As I have said before, one major problem people have is a lack of foresight. Was it so unfathomable that Greece would one day run into trouble? Did no one see this coming? Greece had no way of repaying its debts, but people really could not or chose not to see beyond the present. Greece was basically running a Ponzi scheme and was rolling over debt. A lot of problems would be avoided if we just had a little foresight. But hindsight is 20/20 eh?

One basic concept in finance is the relationship between risk and reward. An investor is rewarded for taking on extra risk by receiving a risk premium.  Say you have the option of investing in country A or country B. Country A offers 10% return while country B offers 5% return. You may think country A offers a better deal, but it is important to ask why the return is so high. Say country A has defaulted on its debt before, and is currently going through tense political turmoil. Country B has never defaulted and is filled with hardworking Teletubbies who live in peace and harmony. Which investment is riskier? Country A of course. The 5% difference between the returns of the two countries is actually the risk premium, compensating for the additional risk that an investor would have to hold by investing in country A.

Prior to becoming a member of the Eurozone, Greece had to offer interest rates of 10%, sometimes up to 18%. When it joined the Eurozone, this dropped to just 3%.  Investors were willing to accept lower interest rates because they believe the Eurozone was impervious from default risk, or at the very least, would not let Greece default. If anything happened, big sister Germany would take care of it.

Then the great recession occurred.

It was revealed Greece owed a ton of money, much more than was reported. Greece debt is $352.7billion, the equivalent of 323 billion euros. You may think this is a measly sum. After all the USA’s debt is in trillions. But Greece’s debt to GDP ratio is about 175% compared to 101% for the United States.

You may be thinking it does not make much sense to bail out a debtor by adding on more debt, and you would be right.

The bailout money came with a short leash. The funds would be paid out in installments and Greece would have to prove its worthiness by reining in its spending and living within its means. Greece has tried to cut state spending and increase revenues by:

The troika punished Greece like a parent punishing an errant child. Some feel the austerity measures imposed on Greece are stifling and harsh. Half the world had never even heard of the word austerity before the Greece kerfuffle.  The Greek government had to sell off its assets in a power company leading to power outages. Greece’s public hospital budget was also cut and according to this article, this has led to anarchy. As expected the Greeks did not like the new rules and so they rioted and protested.

Unsurprisingly, the drastic spending cuts further weakened Greece’s economy. When people do not spend as much, the economy suffers and a recession can be brought on. Unemployment as gone up as government cannot spend as much and with less people in employment, there are fewer tax euros, and fewer tax means less revenue for the government, less revenue means it does not met the bailout requirements meaning more austerity measures. Oi, I need to lie down.

[I recently discovered The Economist’s Kal’s cartoons and they are awesome. They are so apt and so clever.] 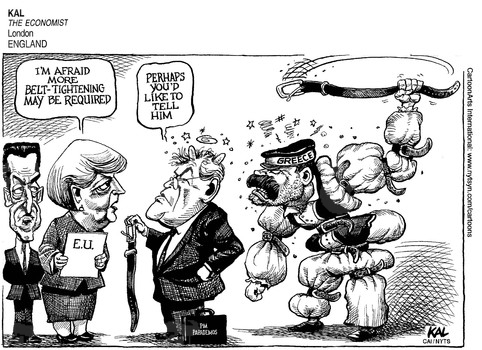 The good people of Greece were sick and tired of the stringent rules they had to live under, so when a nice man promised to lead them to the promised land, they eagerly hopped on board. The new prime minister of Greece, Tspiras, was voted in off the strength of his promise to repel the austerity laws. Greece also got a new finance minister by the name of Yanis Varoufakis who not only looks like a movie villan,but looks like he would appreciate being referred to as one. The world watched with bated breath, waiting for the showdown between Tspiras and the Troika. Who was going to blink first?

In one corner is the defender Greece, weighing a hefty 300 billion kg. In the other corner is the troika, the trifecta of austerity, every debtor’s worse nightmare. Who will win? 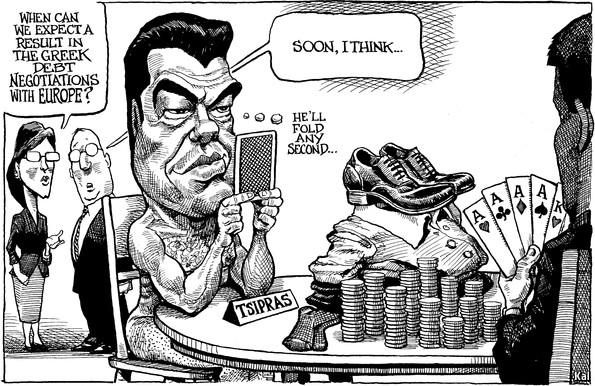 Greece not only has to repay its loans, it still has to pay salaries and do things that a government should do. As Yanis Varoufakis states, the billions given to Greece actually goes  back to financial institutions in loan repayments and does not go back to the people of Greece.

Greece owes so much and cannot afford to default because the results will be catastrophic for Greece and the Eurozone. Greece is as they say “too big to fail”. Hmmn where have we heard that before? Oh yeah during the financial recession in America.

There is also the fear of a domino effect- other countries following in the lead of Greece. If Greece defaults, then Spain, Italy, Portugal et al may also default. If they default, investor confidence will be shattered. If Greece leaves the Eurozone, then other countries will leave the eurozone as well.

Maybe it is time for the Eurozone to come to an end. It was a fun project and will be a useful lesson to generations to come.

Is the world being too harsh on Greece? Are they simply reaping what they’ve sown?  Are the Greeks really lazy or have things been blown out of proportion? Statistics show that Greeks work longer hours than Germans. Say what? Have we all been bamboozled?

I am not going to launch a defence of the Greeks, but you should read this post which attempts to counter the popular opinion that the Greeks are lazy. There, now you’ve heard both sides.

The question now is what is Greec going to do? Some people think the best thing is for Greece to exit the Eurozone, return to the Drachma and start to rebuild itself.  Grexit is a word coined by economists and it refers to the possiblilty of Greece exiting the eurozone. Geddit? Grexit. Like Brangelina.

UPDATE: I originially wrote this post on the 30th of April. A lot has happened since then.

The truth is that Greece did not have anything to celebrate. Not when Tspiras was elected. Not when they voted OXI. There is no easy way out of this hole. We just have to wait and see how this pans out.

To grexit or not to grexit, THAT is the question.